"The performances do full justice to the music, and the program is a nicely balanced alternation of vocal and instrumental music. This will add to anyone’s grasp of the Italian Baroque idiom. " J. F. Weber in Fanfare Magazine Dec. 2008

“…this accessible music is simply a pleasure for the ears and deserves to be further explored…the rich voices of the Portuguese soprano Anabela Marcos and the American bass Mitchell Sandler blend felicitously with the lively accompaniment by La Primavera, thus presenting an informed sample of  a forgotten gem of music history.” Frans Jansen Klassieke Zaken 2008

“Music emblematic of  the elegant, sensuality-driven production of the seventeenth-century courts. A careful, refined performance by La Primavera, vocally as well as instrumentally, that enables us to discover the seductive timbres of the soprano Anabela Marcos and the bass Mitchell Sander.” Sophie Roughol Qobuz 2008

This attractive collection presents six of Telemann’s trio sonatas, but at the end of the program all the players join forces in one of the chamber concertos. In two of the trio sonatas, the harpsichord has an independent obbligato part, while in the others it is part of the continuo; only one scoring (recorder, violin and continuo) appears in more than one work.

The performances are characterized by a flexible elegance and lyricism. The players are sensitive to the rhetorical character of the music, but the phrases are shaped as much by dynamic nuance as by articulation. Their caesuras are rounded and graceful; even staccatos are gently incisive, rather than emphatic. Tempi seem conventionally moderate and steady, without ever degenerating into metronomic rigidity. The instrumental sonorities are gently sensuous, enhanced by the constant presence of the theorbo.

The recording is resonant yet crystal-clear: I have seldom heard a recording of baroque chamber music in which the harpsichord’s melodic contribution emerges so naturally as an equal strand in the texture. There are few bold gestures here, yet only on one occasion (the violin’s brilliant passages in the Concerto’s final Vivace) did I wish for a more extrovert, flamboyant approach. Even there, the players’ technical assuredness and natural musicality are never in doubt.

Throughout, they reveal a clear understanding of the music’s stylistic and affective demands, and they communicate the shape of the movements (and of individual phrases) with apparent spontaneity and captivating charm. A beautiful disc. URI GOLOMB Goldberg Magazine 2007 5 stars http://goldbergweb.com/en/discography/2007/54441.php

« …La Primavera rediscovers five female composers who were famous  in their own era, but were suppressed by prejudiced musicologists afterwards.  Unduly, as proved by this stunning recording of fifteen instrumental and vocal pieces. The rich voice of Johannette Zomer entwines itself voluptuously around the luxurious passagework of Barbara Strozzi, Settimia and Francesca Caccini. Their extremely expressive and dramatic music is a perfect match for Monteverdi’s. The instrumental compositions by Isabella Leonarda and Marieta Prioli, too, are glowing. A wonderful CD!” Thea Derks, Klassieke Zaken 2003, Vol. 23, Nr.2, on CD Concerto delle Donne.

“La Primavera interpreted the works with complete dedication and their enthusiasm was contagious. With the added benefit of the site, a tiny, cozy church with fantastic acoustics, the concert became a marvel… Sum total, “Concerto delle Donne” was the kind of concert where everything dovetails…The afterglow of this concert will stay with me for a long time.” Astrid de Jager, “Nieuwsbrief Vrouw en Muziek”, 30 July 2002.

“This is a carefully assorted selection with an entertaining alternation of vocal and instrumental pieces, but first and foremost it is the quality of the performances that provides this CD with a distinctive edge of advantage in comparison with collection CDs of this kind” Frits van der Waa, De Volkskrant, 15 May 1999

“This CD is bound to seduce…The style is impressive, Monteverdi, Peri, Frescobaldi, D’India, Sweelinck and Carissimi are perfectly  done justice by the patchwork of historical instruments and two voices. After the ideal woman of courtly love, the focus is here on the worldly woman of the renaissance on the borderline with mannerism…” Jacques Doucelin, Le Figaro, 29 January 1999

You can order cd's by sending an email to info@la-primavera.nl 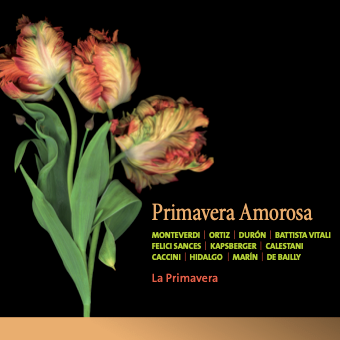