After her graduation as an architect, the Portuguese Soprano Anabela Marcos started her singing studies at the Lisbon Conservatory.

She was granted a full, four-year scholarship from the Gulbenkian Foundation to study at the Royal Conservatory in The Hague, the Netherlands, where she received Performance Diploma’s in Singing, Opera and Baroque Singing.

As a soloist she performed all over Europe and worked with conductors such as Ton Koopman, Jos van Veldhoven, Sigiswald Kuyken and Michel Corboz.

In the field of chamber music she is a member of the baroque-ensemble La Primavera and has a duo with the pianist Ana Sanchez Donate.

Her engagements for the near future are, amongst others, fully staged performances of Bach’s ‘Peasants Cantate’ and ‘ Pyramus and Thisbe’  from Montéclair with the Apollo Ensemble, and in February 2013 she will travel to Brazil to sing the part of Belinda in Purcell’s ‘ Dido and Aeneas with Ensemble La Primavera

Anabela has been giving singing lessons at the BSN in Voorschoten since 1999. 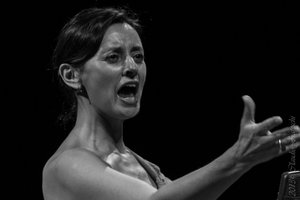